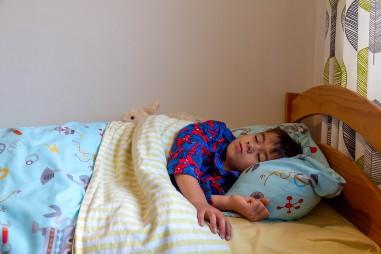 Why is sleep important?

Children of all ages need to get enough sleep so they can play, learn and concentrate during the day.

Also, sleep patterns change as babies and children get older. For example, as babies grow, they begin to sleep less during the day and more at night. And children generally need less sleep as they grow older.

Children’s sleep needs and patterns vary, so the information below is just a guide. Your child’s sleep might be different.

Babies under 6 months: when and how much they sleep

Newborns
Newborns sleep on and off during the day and night. They sleep for 14-17 hours every 24 hours.

Newborns move through active and quiet sleep in cycles that last about 50-60 minutes. They might wake up after a sleep cycle and need help getting back to sleep.

Babies 3-6 months
By three months, babies start to develop night and day sleep patterns, and they tend to start sleeping more during the night. Babies usually sleep for 12-15 hours every 24 hours.

At 3-6 months, babies might start moving towards a pattern of 2-3 daytime sleeps of up to two hours each. They might still wake at least once at night.

Babies 6-12 months: when and how much they sleep

Sleep during the night
As babies develop, more of their sleep happens at night.

At this age, most babies are ready for bed between 6 pm and 10 pm. They usually take less than 40 minutes to get to sleep, but about 1 in 10 babies takes longer.

Babies might be having long sleeps of six hours at night by the time they’re six months old.

Almost two-thirds of babies wake only once during the night and need an adult to settle them back to sleep. About 1 in 10 babies calls out 3-4 times a night.

More than a third of parents say their babies have problems with sleep at this age.

Sleep during the day
Most babies aged 6-12 months are still having daytime naps. These naps usually last 30 minutes to 2 hours.

Some babies are difficult to settle or wake a lot at night. A positive bedtime routine can help your baby settle to sleep. Phasing out sleep habits like rocking baby to sleep can also make it more likely baby will settle themselves when they wake in the night. But if you’re happy to resettle your baby each time they wake during the night, that’s just fine.

Toddlers: when and how much they sleep

Some toddlers aren’t keen on going to bed at night. Often this is because they’d like to stay up with the family. This is the most common sleep problem reported by parents. It peaks around 18 months and improves with age.

Less than 5% of two-year-olds wake three or more times overnight.

Preschoolers: when and how much they sleep

Some preschoolers might also have a day nap that lasts for about an hour.

School-age children: when and how much they sleep

From about five years of age, children no longer need a day nap if they’re getting enough sleep overnight.

Primary school-age children are usually tired after school and might look forward to bedtime from about 7.30 pm.

Teenagers: when and how much they sleep

Children entering puberty generally need about 8-10 hours of sleep a night to maintain the best level of alertness during the day.

Changes to the internal body clock or circadian rhythm during adolescence mean it’s normal for teenagers to want to go to bed later at night – often around 11 pm or later – then get up later in the morning.

Over 90% of adolescent children don’t get the recommended amount of sleep on school nights. Getting enough good-quality sleep is important during this period, because sleep is vital for thinking, learning and concentration skills. Lack of sleep in these years has also been linked to mental health conditions like depression and anxiety.

We all cycle between different types of sleep during the night and also during long naps.

From about six months of age, a sleep cycle contains:

In REM sleep, your eyeballs flicker from side to side underneath your eyelids. REM sleep is also called dream sleep.

The amount of REM and non-REM sleep in a cycle changes throughout the night.

Children have more REM sleep and light non-REM sleep in the second half of the night. Children wake more easily from these kinds of sleep, so they might wake up more during this time than at the beginning of the night.

This article was published with permission from raisingchildren.net.au

Sign up to receive more great ideas and recipes